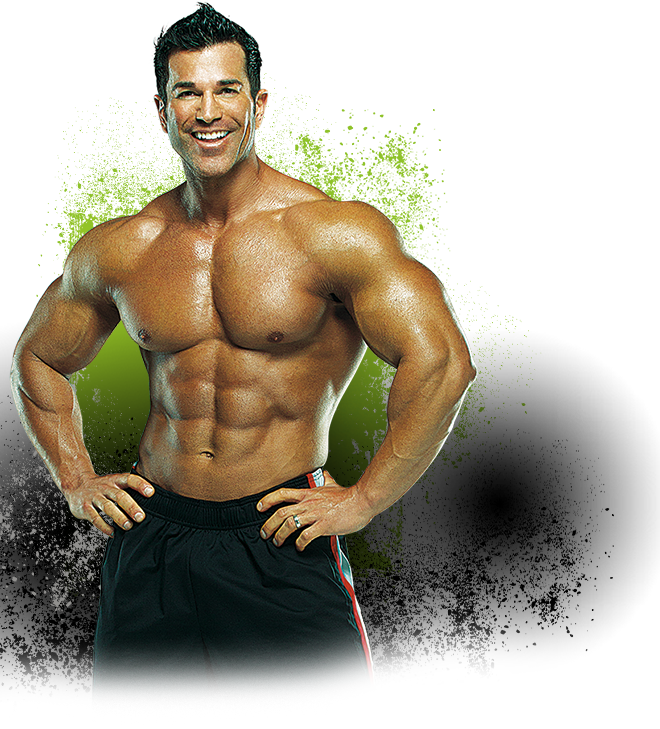 Want to turn some heads?

Go from Regular Joe to JACKED...
Ho-Hum to HOTTIE in 90 Days Flat!

Look
at these bodies! 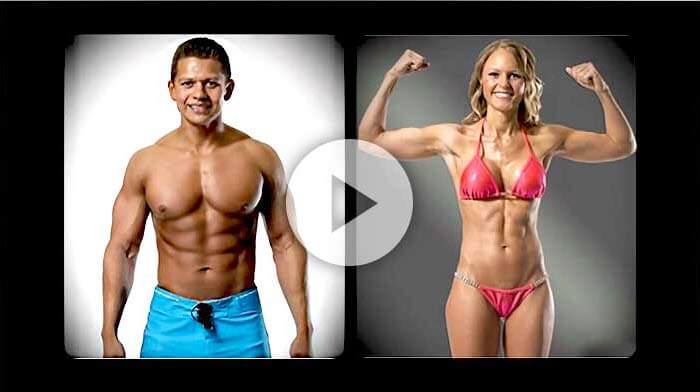 You can do this!

Forget everything you know about weight training. Body Beast has cracked the code for how to dial in the lean, chiseled physique everybody wants. And you can get it in 90 days, at home, with just a few dumbbells, in as little as 30 minutes a day, for less than fifty bucks.

How did Body Beast turn the workout world upside down? Read on...

Body Beast is
the Real Deal

"Before Body Beast, I was soft and chunky and pudgy, and THIS IS THE AFTER result."
MARK M.
LOST 48 POUNDS†
before
after

"Body Beast has completely TRANSFORMED MY BODY. Swimsuit season is here and I've never been more ready."
SHANDA N.
LOST 24 POUNDS†
before
after

"This program will get you serious about getting SERIOUS RESULTS."
SCOTT H.
GAINED 20 POUNDS†
OF MUSCLE
before
after

For the next 90 days of Body Beast, you need to do just 2 things

Sound like any other workout you've ever done?
It's Not...and here's why:

Body Beast takes body transformation to the level of pure science. Things have changed since the days when "pumping iron" just meant doing repetitive sets, one body part at a time, with heavy weights.

That means every workout...every meal...every rep in every set is laser-focused on using exercise science to turn any run-of-the-mill body into a state-of-the-art physique. And Body Beast works for women just as well as it does for men.

There's more to getting ripped than doing arm curls and chest presses. Body Beast is built from a proven combination of sets, reps, resistance, and short recovery. It's called Dynamic Set Training®, and it's NOT easy. But it IS proven to strip away fat and add definition to your whole physique. 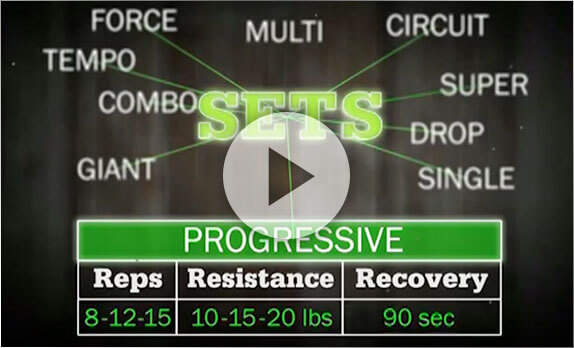 Does it work? Just ask Caesar...

"Now I don't have to worry about what people might say behind my back because I KNOW I look good."
BEFORECaesar L.AFTER
Lost
63
pounds†

"Body Beast is not just for guys. If you're a female, you'll love Body Beast. You'll see amazing results. I have."
BEFORENatalie M.AFTER
Lost
2.5
inches†

Whenever someone gets serious about getting really BUILT, they turn to Sagi Kalev. He's the go-to guy for anyone who needs to burn fat and build muscle. Professional physique models, actors, and bodybuilders pay thousands to get results from his proven body-transforming training method. But you won't have to pay thousands. Because we put it in a box, so you can get built like a beast at home.

Body Beast is proven to get you the same mind-blowing results his clients get...†
and right now, you can save $80.

Here's what you get in Body Beast: 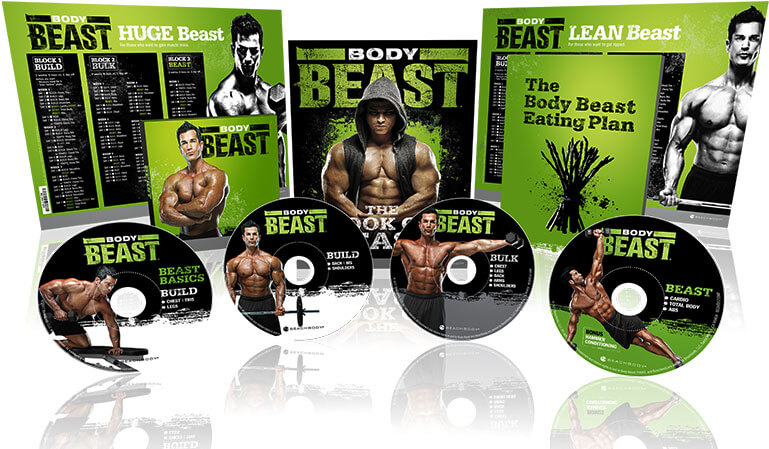 12 Dynamic Set Training workouts on 4 DVDs: Each month you start a new "Block" so after 90 days—you're a total BEAST!

Start lifting hard with Sagi in Block 1. Watch your body transform as you take on Super sets, Giant sets, and Single sets, to create strength and definition in the first 30 days.

"The first week through, I was hooked."

"Body Beast does everything a personal
trainer could do."

Finish up with Block 3. An incredible rotation through the 12 Body Beast workouts to put the finishing touches on your new physique.

"Give it over to Sagi, and next thing you know, you'll have the abs and body you want." 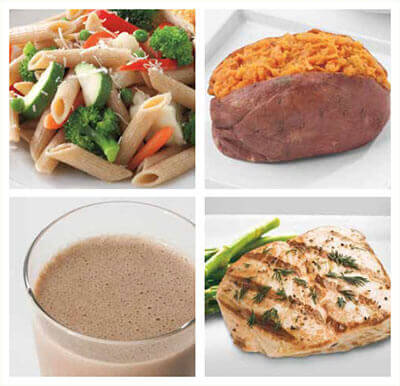 Body Beast takes all the guesswork out of getting built! With custom meal plans, proven recipes, and easy-to-make power shakes that build lean muscle and burn fat fast, you can forget the calorie-counting and concentrate on taking your physique to a whole new level of awesome.

Plus tools to make it totally easy to follow: 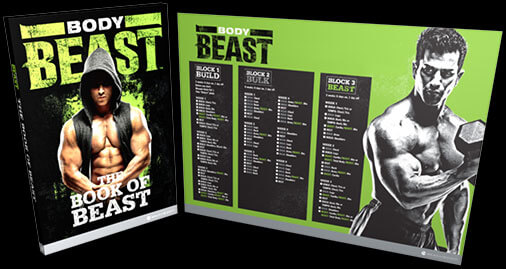 And Check Out These 2 Extra Bonus Gifts! 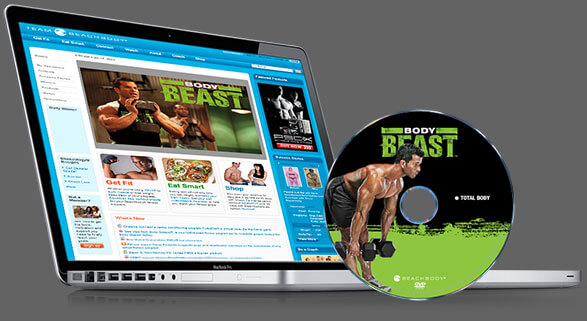 Bonus gift #1: At the last minute, Sagi INSISTED we include his personal favorite—TOTAL BODY—that targets every muscle group in a single, sweat-drenched, 38-minute workout. So we've made it a FREE Bonus Gift,
just for you!

Sold separately, we're talking about $500+ worth of workouts and training tools... 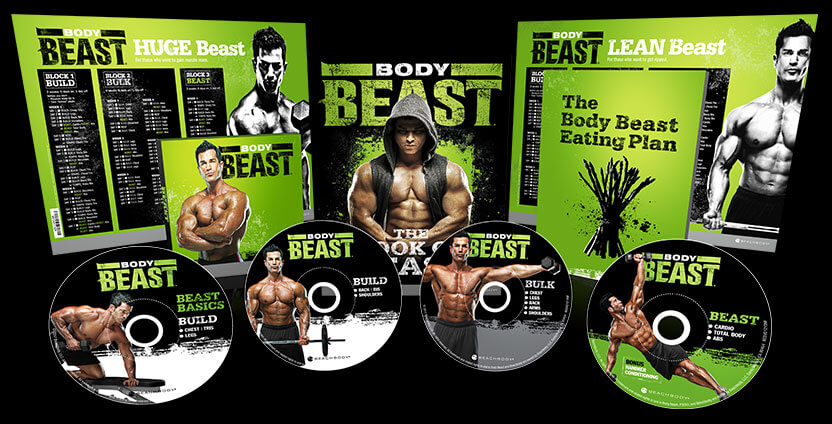 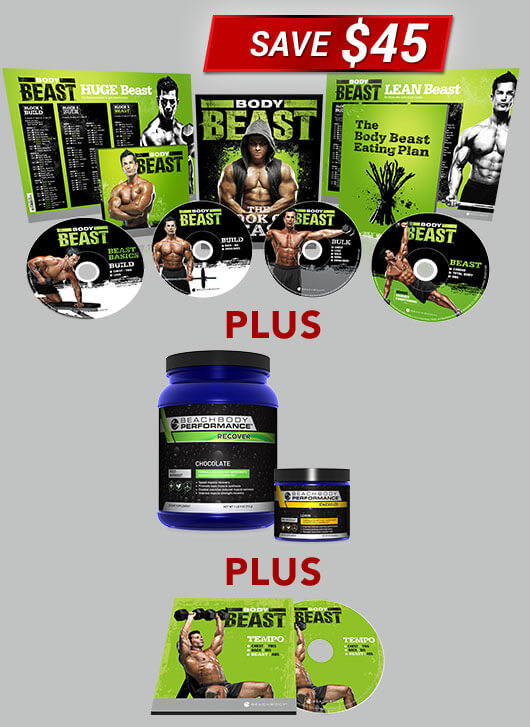 This is how you sculpt the ultimate physique! The Body Beast Ultimate Kit includes everything from the Base Kit: 11 Dynamic Set Training workouts, powerful Support Tools, and 3 BONUS Gifts including a FREE Total Body workout.

PLUS, you get a one-month supply of two high-performance nutritional supplements to help you accelerate your transformation, push harder and last longer, for mind blowing results:

Best of all, starting in 30 days, Sagi has arranged for you to automatically receive a fresh 90-day supply of both supplements every 3 months for $109.95 per month plus $4 Super Discount shipping per shipment on the credit card you provide today. If you don't want any more after your 30-day supply, no obligation—cancel anytime to avoid future charges by calling to let us know.

*These statements have not been evaluated by the Food and Drug Administration. This product is not intended to diagnose, treat, cure, or prevent any disease. 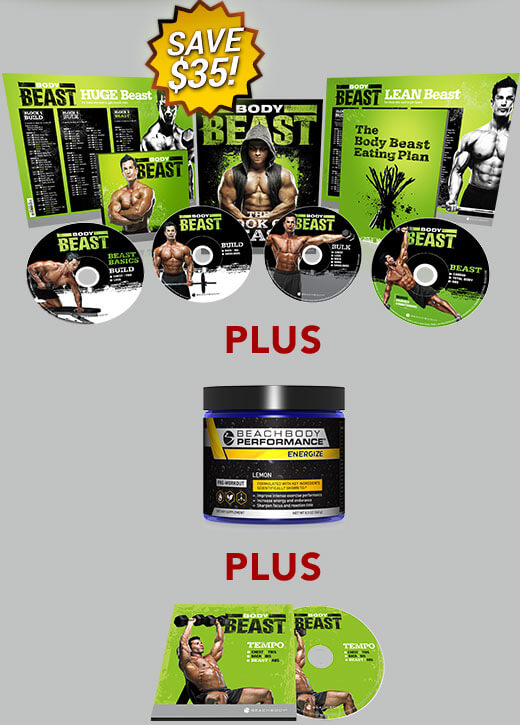 Take your transformation to the next level! The Body Beast Deluxe Kit includes everything from the Base Kit: 11 Dynamic Set Training workouts, powerful Support Tools, and 3 BONUS Gifts including a FREE Total Body workout.

PLUS, you’ll get a one-month supply of our high-performance pre-workout supplement to help you accelerate your transformation, push harder and last longer:

Best of all, starting in 30 days, Sagi has arranged for you to automatically receive a fresh 90-day supply of Energize every 3 months for $49.95 per month plus $4 Super Discount shipping per shipment on the credit card you provide today. If you don't want any more after your 30-day supply, no obligation—cancel anytime to avoid future charges by calling to let us know.

*These statements have not been evaluated by the Food and Drug Administration. This product is not intended to diagnose, treat, cure, or prevent any disease. 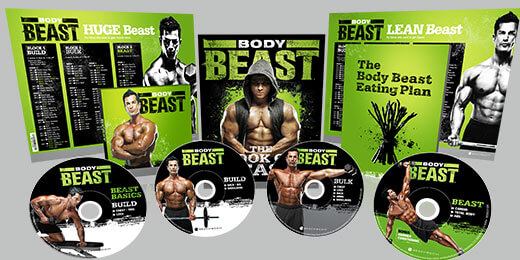 The professional way to get completely ripped and chiseled in 90 days. Build a body that turns heads with this revolutionary all-in-one weight-training, nutrition, and supplement system. Created by world-class trainer and former Mr. Israel, Sagi Kalev, Body Beast has cracked the code for how to dial in the lean, chiseled physique you want—GUARANTEED, or your money back (less s&h).

Everybody says they want a great body, but if you really want to get that lean, defined body that turns heads...it's time to get up off the couch and take the first step toward doing it.

Here's the good news—I'm going to make that easy for you. Just click the "YES" button below, and I'll take care of the rest. I WILL get you from Day 1 all the way through Day 90. Stick with me...and I WILL get you a body that gets attention, in all the right ways. And you know that's what you want. So go ahead and order Body Beast right now. 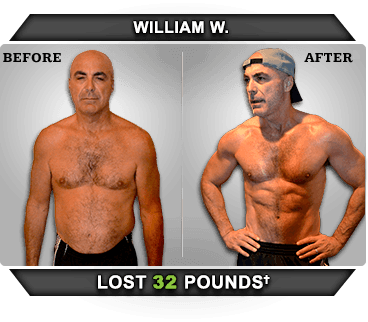 "At 52 years old...I'm actually in better shape now than when I was flying fighters in the Air Force."

The entire Body Beast program is backed by Beachbody's full 90-Day Money-Back Guarantee. Think what that means—do the entire program and THEN decide. If you (and everyone who knows you) aren't totally blown away by the way you look, just send the product back and we'll refund you the whole purchase price (less s&h).

Better yet, no matter what you decide, you can keep the Body Beast Fitness Guide, the Eating Plan, and the Total Body workout—all together worth $60—FREE!

Right now, this is what you should be thinking.

Yes, I want to get built, faster than I ever thought possible.

Send me the complete Body Beast program, including my FREE gifts, while the price is 2 easy payments of only $19.95 (plus s&h). I understand that Body Beast comes with a 90-day Money-Back Guarantee, less s&h.

"You're gonna Love me when I'm done with you!"

Try this program with the Body Beast® 90-Day Money-Back Guarantee. If you're not satisfied with your results within 90 days, simply call Customer Service for a Return Authorization number to return the program for a full refund of the purchase price, less s&h–no questions asked. 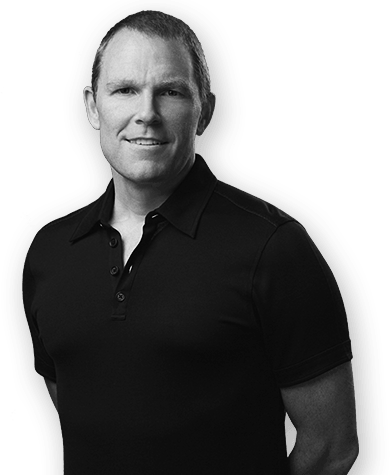 Who is Sagi Kalev?

Sagi Kalev started his fitness journey over 25 years ago, back home in Israel, and made his mark in the industry by earning the coveted title of Mr. Israel—TWICE! But Sagi is more than a big, buff guy. He's one heck of a brainiac too. Not only does he hold a degree in physical education with a minor in nutrition from the University of Central Florida, Sagi's a clinical nutritionist as well as a functional medicine practitioner.

And what that means for you is that since Sagi is an expert on how the human body operates and what you need to do in order to achieve rapid results, he's the go-to guy for total-body transformation. You'll learn how to unleash your body's natural power to build muscle as well as carve incredibly defined lines.

Sagi has appeared in thousands of bodybuilding magazines, and has been featured on more than 50 international magazine covers, including appearing on the cover of Muscle & Fitness magazine an amazing 11 times. He is a Master Professional Personal Trainer and a member of the IFBB Propta Hall of Fame.